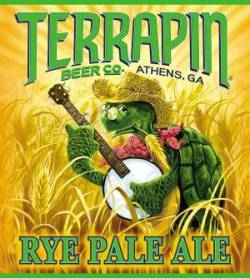 By using an exact amount of rye, a grain seldom found in other micro brewed beers, the Rye Pale Ale acquires its signature taste. Made with five varieties of hops and a generous amount of specialty malts, it offers a complex flavor and aroma that is both aggressive and well balanced â€“ a rare find among beers. The Terrapin Rye Pale Ale was released in Athens, GA in April of 2002 at the Classic City Brew Fest. Six months later this beer which was sold only in Athens was awarded the American Pale Ale Gold Medal at the 2002 Great American Beer Festival, the most prestigious competition in North America. We hope you will agree with our peers in the brewing industry that this is truly one of the best pale ales in the country. http://www.terrapinbeer.com/